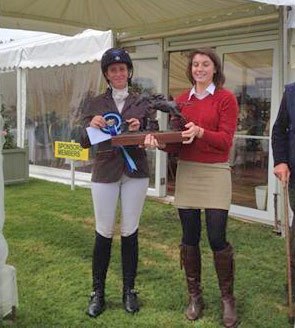 It was another good weekend Team Donegan Ryan as Trish Ryan recorded another decisive victory when taking the honours in the Walker Groundwork’s Open Intermediate in the Floors Castle Horse Trials in Scotland.

The event which was held on 16th, 17th & 18th of May 2014 attracted some of the biggest names in eventing. Riding Carol and Tom Henry’s Tullineaskey Hi Ho, Ryan took home “The Murphy Himself Trophy” which no doubt occupy a special place in the Ryan household. This is the second major achievement for the team with Mike Ryan being awarded a coveted Armada dish from Badminton Horse Trials earlier in the month. Tullineaskey Hi Ho is an Irish Sport horse by Ard Ohio, the gelding has recorded a series of good results under Ryan’s command, which includes the runner-up spot in Ballindenisk International CIC 3* and Kilguilkey Horse International CIC2*.
Speaking after the win; Ryan said, “It was a great result for the team and for our owners Carol and Tom Henry. Hi Ho is a horse with a lot of scope and he has been going extremely well. As a team we put a lot of work in during the winter and it is now paying off. I am looking forward to Tattersall’s International in a few weeks and hopefully myself and my husband Mike can record a few more wins.”